This summer’s excursion highlight was a trip to the lake Lake Muhazi . As much as we are striving to provide life’s necessities for the boys, we also believe that a vital part of growing up should be gaining new life experiences. We were fortunate enough to gain a small donation that would enable us to take the boys out for a swim. While researching about safety measures, I happen to come across inflatable paddle board reviews and have ordered a few of them to help the boys grow more interests and hobbies. I hope all the effort and the donations we are receiving will be enough to bring about changes into the boy’s lives.

A memorable day out

Evode, our centre manager, thought it was important to get the boys outside of the city of Kigali and make a day of it. We found a resort which was currently under renovations, which meant that we had it all to ourselves! 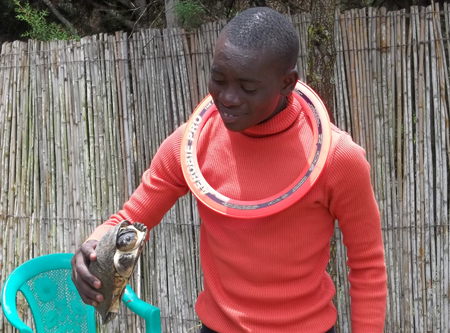 David had never seen a turtle before and is fascinated

Many boys were nervous but very excited as they had never left Kigali nor been swimming before! The bus ride was an experience in itself. We were crammed in a little bus and spend the whole journey singing and admiring our surroundings. We got there and the boys were set free to explore the playground. 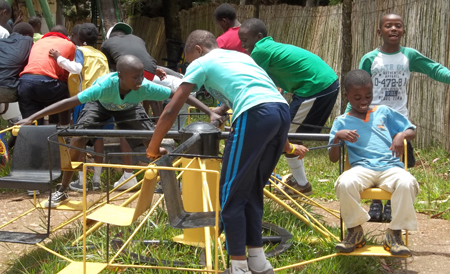 Enjoying the playground on the resort

Swimming was everything everyone hoped it would be. The boys all had a great time and many of them were beginning to be able to swim on their own!
However for some, the only way we were able to get some boys out of the water was by enticing them to come on a boat ride! The resort had a small boat which they took us out on.

About halfway during the voyage though, it became clear to us that the boat had leaks and needed water to be bailed out! Luckily, we were never in great danger of sinking, and it became very comical to watch the boys bailing water!

It was a wonderfully relaxing day for everyone. It was a day of many firsts for the boys. It was a day when they were enjoying life and not just “surviving” like when they used to live on the street.